I’ve always loved to be alone. Always. My poor brother was stuck with the worst sibling in the world because I’d rather play by myself than with him. And it’s not like he wasn’t fun to play with, I just had my own games in my own imagination that were better played by myself.

I enjoyed myself at college a lot more after I decided to splurge for a private room. I had great roommates too! It wasn’t their fault. I just did better by myself.

So when I was planning my trip to Peru, I didn’t think twice about my six days alone at the end. Joe and Brian had done the Inca Trail before I came and Joe wanted to do other things besides Machu Picchu again, so I decided to schedule my Machu Picchu tour after he left. No big deal. I do great alone.

Then it was time for him to leave.

Me: “Are you sure?” To be interpreted as, “Please let me walk you out to the taxi and squeeze every ounce of human interaction out of you.”

And then we said our goodbyes. And he left. And within seconds I realized I was more alone than I’d ever been in my life.

I quickly realized there’s a difference between telling my brother I want to play alone, but knowing he’s still out there to play with if I want, and having my brother be on a different continent.

There’s a difference between staying in a private room, but having roommates to chat with in the kitchen, and not speaking the same language as most of the people around you.

For the first time, ever, I was really and truly alone.

So I sat in the lobby until the wifi went out, and I couldn’t interact with Facebook anymore.

Then, I went to my room and listened to a podcast while doing some laundry because heaven forbid I’m alone with my thoughts.

I flipped on the TV and found an episode of Will and Grace in English. I’d never watched Will and Grace, but I definitely enjoyed it at that moment.

Finally, I decided I had to actually leave the hotel at some point so I went to Choco Museo – the Chocolate Museum – for a brownie because chocolate cures all.

The next day, I did a walking tour of Cusco and went to the Inca Museum. I discovered one of the hardest thing about being alone is having no outlet. While walking through the museum, I wanted to discuss what I was seeing, but there was no one to discuss it with. Right now I’m taking in a lot of information and sights and emotions and having no one to discuss them with is difficult.

As probably expected, with the difficulties, I’ve found some pretty amazing perks of being alone too.

I ate dinner at a restaurant all by myself, the thought of which always sounded too pathetic to be attempted before. It ended up being incredibly empowering.

And the truth is, I’m never alone for long.

Yesterday, I ate lunch with a Swedish Energy healer who lost his mojo after breaking up with his girlfriend, and had spent the last 10 days with shamans in the mountains getting it back.

I went on a tour today with people from all over the US and Europe, and spoke with nearly everybody, including eating lunch with a couple from Diamond Bar, not far from where my family now lives.

One of my goals on this trip was to get better at approaching people and small talk. Even so, Joe always mocked me because I chose the table at the restaurant furthest from everyone else. But the last few days I’ve been forced out of my comfort zone and been able to talk to more people. Realizing you are NOT always painfully awkward is a good feeling.

Now, I’m sitting in a tiny hotel room in Urubamba, a town in the Sacred Valley between Cusco and Machu Picchu. The hotel itself is gorgeous and full of flower gardens. My first inclination was to text Joe and let him know he missed out of one of the best hotels of the trip, but there’s no Wifi. No television. I’ve refrained from flipping on my iPod (I don’t know how long that is going to last, though, if I’m being honest). 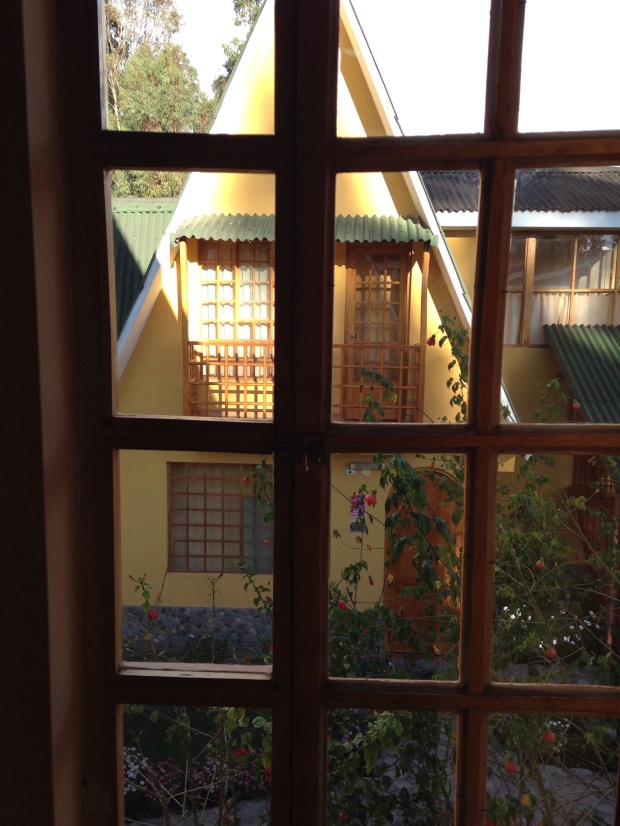 PS Turns out there’s wifi in the lobby after all. But I wrote this before I knew that! I think it mostly still applies.